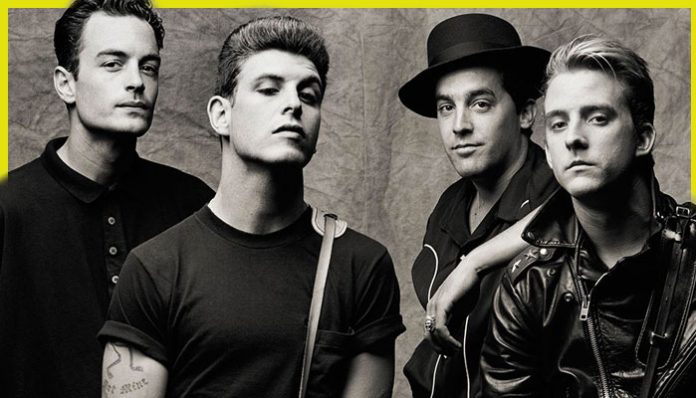 Welcome to Alternative Press’ list of the best punk albums from 1988. Which, at the time, would have had most folks scratching their heads. After all, in 1988, the entire world thought punk rock was dead. Look at the charts: Guns N’ Roses and the more lightweight Sunset Strip glam-metal acts were defining “rock ’n’ roll” in the mainstream. And Ronald Reagan was about to give way to George H.W. Bush in the White House. It felt like we’d have a Republican majority forevermore. And Axl Rose and lightweight, manufactured dance-pop star Rick Astley would be ruling the airwaves for just as long. And hardcore was now really fast heavy metal, rather than really fast punk. The more metallic it was, the more it got called speed metal.

But until Green Day’s Dookie hit in 1994, punk did not thrive on the radio or MTV. It blossomed underground. Which is where you will find all the best punk, anyway.

Read more: The best punk albums of 1987 are still setting fire to the underground

As the entire world got Rick-rolled, bands such as ALL, Naked Raygun and Bad Religion were fertilizing the eggs that would hatch the punk-pop future. Bad Religion, in particular, would unleash the album many see as punk-pop’s alpha and omega, Suffer. Meanwhile, Social Distortion’s Mike Ness kicked smack, washed off his eyeliner and rediscovered his daddy’s old Johnny Cash records. Los Angeles’ seedier environs experienced a fundamentalist punk resurgence courtesy of the Lazy Cowgirls and Jeff Dahl. Butthole Surfers were paving the way for less weird, less dangerous future acid-rockers like Osees. The ’60s garage/punk cross-fertilization continued apace, courtesy of Northwestern rockers such as Dead Moon and Girl Trouble and England’s Thee Mighty Caesars. Also, the first stirrings of a sound called grunge were brewing, courtesy of a rising Seattle label called Sub Pop. All of which fed into 15 of the best punk albums of 1988.

In the five years since these Orange County punk traditionalists’ debut, Mommy’s Little Monster, leader Mike Ness’ drug habit hit him hard. After cleaning up, he assembled a new rhythm section around himself and stalwart rhythm guitarist Dennis Danell. Social Distortion commenced LP No. 2 with oldies “It’s The Law” (titled “Justice For All” on 1981 Posh Boy comp The Future Looks Bright Ahead) and “Indulgence.” The rest split into more country-flavored material (“Like An Outlaw (For You)” and Rolling Stones-ian rockers (including the Stones’ own “Backstreet Girl”). It was a glorious, rootsy new direction.

This magnificent third LP saw these Chicago punk warhorses refine their driving pop punk without sacrificing ’77-ish grit and aggression. Tracks such as opener “Soldier’s Requiem” crammed more “whoas” per square inch than a Buzzcocks or Misfits yard sale.  John Haggerty’s wall of guitars was still Naked Raygun’s trademark, alongside founder Jeff Pezzati’s potent wail, capable of lower-register dips on “Walk In Cold.” The facades and truths infusing Reagan-era neo-conservative America pervade Jettison like a malignant odor. Then a rampaging cover of Stiff Little Fingers’ “Suspect Device” blows it all up. (On Oct 9, bassist Pierre Kezdy died in hospice of cancer at age 58, in Glenview, Illinois. Our condolences to his family, friends, and many bandmates over the years. A GoFundMe campaign has been set up to help his family with expenses.)

Modern-day punk-pop starts here. Ask anyone from Green Day to NOFX. Bad Religion had lost their way considerably from their 1982 loud-core debut, How Could Hell Be Any Worse? They’d cut an ill-advised prog-rock follow-up, Into The Unknown, literally killing the band. In 1984, Circle Jerks guitarist Greg Hetson talked college student singer Greg Graffin into reforming the band with him. Come Suffer, guitarist Brett Gurewitz and classic rhythm section Pete Finestone (drums) and Jay Bentley (bass) returned. Tempos returned to the original HC velocity, with singalong melodies now firm and Graffin swallowing Roget’s Thesaurus whole and spewing it atop the works.

Or Milo Goes To Grad School. Descendents vocalist Milo Aukerman had left the band after their ALL LP and 1987’s FinALL tour to study biochemistry. Drummer Bill Stevenson, guitarist Stephen Egerton and bassist Karl Alvarez opted to continue with ex-DYS/Dag Nasty vocalist Dave Smalley, renaming themselves after that last Descendents album. Opener “Pretty Little Girl” indicated Smalley had grown as a singer, while the band would be indulging even more neck-snapping prog-rock time signature shifts. Egerton flashed pure metal chops on tunes such as “A Muse.” But “Sugar And Spice” and “Just Perfect” proved their pop smarts were growing sharper.

Butthole Surfers’ albums became the same bad-trip psychedelic events as their gigs. Opener “Jimi” alone sounded like the aural equivalent of those flashing strobes/flaming cymbals/gory driver’s ed and autopsy films/unerotic nude dancers sensory assaults. Any ties to punk now seemed gone. The album artwork didn’t even feature song titles—just cartoons seemingly indicating these tunes had names such as “I Saw An X-Ray Of A Girl Passing Gas.” Paul Leary’s guitar work was getting sicker by the nanosecond, King Coffey and Teresa Nervosa continued their double-drum demolition and Gibby Haynes’ vocals were now warped and distorted beyond recognition. Truly one of the best punk albums of 1988, and weird AF.

After an L.A. stint in the short-lived Doggy Rock, Brian Baker brought his beefy Les Paul-isms back to Dag Nasty in early ’87. With Smalley now in ALL, Pete Cortner had permanently assumed vocal duties during the previous year’s Wig Out At Denko’s. Their debut for Giant Records was instantly distinguished by Cortner’s more whispery croon. You could hear the influence of the Cure (opener “Trouble Is”), psychedelia (the title track) or even the Smiths (“The Ambulance Song”) coating and tempering the hardcore riffs. The album was controversial among the band’s fanbase. It remains out of print to this day.

Dead Moon – In The Graveyard

Fred Cole was a veteran Northwestern rocker, active since the ’60s. His band the Lollipop Shoppe’s “You Must be A Witch” is a garage standard. Tooling around Portland, Oregon, for years in various bands, including ’80s punks the Rats with his wife Toody on bass and running a guitar shop called Captain Whizeagle’s, he formed Dead Moon with Toody and young drummer Andrew Loomis in 1987. The debut set the template: Tough, dark garage-punk, recorded with minimal production and mastered on a mono lathe that had cut The Kingsmen’s “Louie Louie.” Tracks such as “Graveyard” and “Out On A Wire” are timeless.

In the gap between their debut and their second LP, everything about Australia’s Hard-Ons had intensified. In the opener “Made To Love You” alone, the distortion factor on Blackie’s guitar was multiplied by 10, shifting to a molten metal riff after a burst of noise and a furious, wah-drenched solo. The finale? A hardcore outburst bordering on speed metal or even grindcore. The rest of Dickcheese is spent unpacking the individual strands of that one song. But just to remind you this is the Hard-Ons, the second tune “What Am I Supposed To Do” is their earlier, perfect skate-pop.

A fave of Kurt Cobain’s, Olympia, Washington’s Beat Happening built a lo-fi empire around leader Calvin Johnson’s uber-indie K Records throughout the ’80s. Comprising Johnson’s bass profundo quaver, Bret Lunsford’s untutored guitar and Heather Lewis’ primitive Moe Tucker-ish drums and innocent-sometimes vocals, the band traversed the turf between the Cramps’ more garagey leanings and Jonathan Richman’s carefully cultivated naivety. Tracks such as “Indian Summer” or Lewis’ “In Between” presumed an odd, childlike sexuality. But when Lunsford stepped on his fuzzbox, ala “Bewitched” or “Hangman,” a startling menace was unleashed. Twenty-two years later, Jamboree sounds contemporary and kills the twee indie-isms it inspired. A weird mutation for one of the best punk albums of 1988.

Since 1987’s incredible Tapping The Source, L.A.’s fundamentalist punk powerhouse the Lazy Cowgirls had issued a better-produced EP, Third Time’s The Charm, which amped up the fury and aggression. It also featured two of their best songs to date, “Losin’ Your Mind” and “Dye ‘N’ Red.” The inaugural release of supreme garage/punk label Sympathy For The Record Industry, the live Radio Cowgirl is the band’s Metallic K.O. Raw renditions of material from their last two studio efforts mixes with brutal reamings of roots material, such as the Saints’ “Know Your Product” and Ramones obscurity “Carbona Not Glue.”

Girl Trouble – Hit It Or Quit It

Yet another 1988 Northwest legend launches. Coming from Tacoma, Washington, Girl Trouble resembled the Cramps moving to town and augmenting Lux Interior and Poison Ivy with members of the city’s nasty-ass ’60s garage legends, such as the Sonics. Which meant Bon Von Wheelie effortlessly pounded basic beats as brother Kahuna unleashed 1,000-lbs. of bee fuzz blasts. And it was all underpinned by Dale Phillips’ undertaker bass. Riding the top: K.P. Kendall’s thorough channeling of Interior. With raunchy originals in “Wreckin’ Ball” and “Hot Monkey Love,” plus recast oldies such as Paul Revere And The Raiders’ “Steppin’ Out,” this debut shines like a million black wax candles.

Comprising (at this point) singer Mark Arm, guitarists Stone Gossard and Bruce Fairweather, bassist Jeff Ament and drummer Alex Vincent, Green River kicked around Seattle a while, blending hard-rock and punk basics. Rehab Doll was one of Sub Pop’s earliest releases. Loaded with snarling rockers such as “Porkfist,” the record overflows with gnarling guitars and Arm’s lazy Iggy Pop drawl. Sub Pop marketed it as “ultra-loose GRUNGE that destroyed the morals of a generation.” Arm and estranged Green River guitarist Steve Turner would define that capitalized term in their next band, Mudhoney. As would Gossard and Ament in Pearl Jam.

https://www.youtube.com/watch?v=YS6Rb5iik_MHailing from Denver, the Fluid were Sub Pop’s first signees from outside the Pacific Northwest. All veterans of area hardcore acts, the Fluid applied a powerhouse riff rock, drawing from ‘’70s heroes such as the Rolling Stones, Faces and MC5, plus early punk. “It’s My Time” stole its riff wholesale from the Sex Pistols B-side “Did You No Wrong,” while original such as “Cold Outside” and “Left Unsaid” bristled with Detroit swagger. John Robinson had a great Iggy Pop leer, while guitarists James Clower and Rick Kulwicki lit plenty of fireworks. Clear Black Paper is definitive rock ’n’ roll. And one of the best punk albums of 1988

https://www.youtube.com/watch?v=ac_z4kJyJCcJeff Dahl had been tooling around Los Angeles for years, slithering in and out of primary local punk acts such as Vox Pop and the Angry Samoans. Now sober and assaulting the same club circuit as new punk traditionalists the Lazy Cowgirls and the Creamers, he had set himself up as the local high-priest of Detroit roots grime. Comprising sessions for an earlier LP featuring Dead Boys guitarist Cheetah Chrome and newer material, Vomit Wet Kiss was Sympathy For The Record Industry’s second release. Tunes such as “Suicide City” and “Mary, Are You Living?” would build Dahl’s grimy, post-glam underground empire forever.

Wrapping up the best punk albums of 1988: America’s official introduction to the raw charms of Britain’s genius, dyslexic garage-punk poet and painter Billy Childish. Drawn from the band’s first five LPs, such as Wiseblood and Acropolis Now, the compilation converted garage malcontent Tim Warren’s Crypt Records from a reissue label into a showcase for the ’80s raunchiest talent. With Childish’s barely controlled Kinks riffs, snarling Bukowski-esque lyrics and the band’s casual aggression, along with Shel Talmy-like production style, they were a perfect gateway drug for Crypt into the modern world. Plus, this contained some of the band’s most killer bashers, such as “Wiley Coyote” and “You Make Me Die.”

Insomniac Teases a Spidey Team Up In Spider-Man: Miles Morales