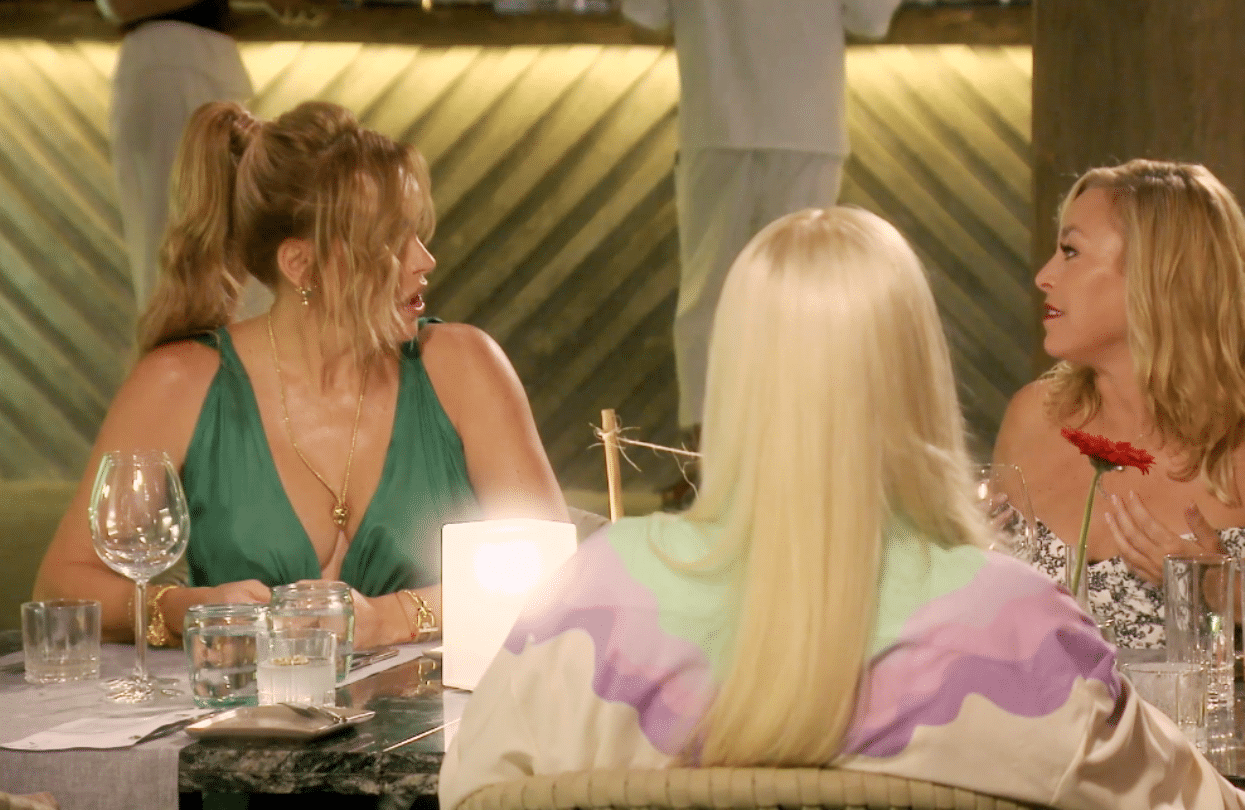 The ladies are having a girls’ trip in Punta de Mita, Mexico, hosted by Dorit on this episode of the Real Housewives of Beverly Hills. The hope was that this would be a good distraction for Dorit after the home invasion, but she is finding it harder to relax than she thought. The constant fighting between Sutton and Crystal certainly isn’t helping things, either. Can’t these women just get along??

“Certain things you don’t downsize on and that’s your glam” — Erika Girardi. Despite her financial hardships and marred reputation, ya better believe Erika is bringing her besties with her, even if it means she gets dolled up just to sit on a beach for breakfast. Sutton, the vegetarian, helps herself to some bacon, and Dorit is the last to arrive. She shares that she did not sleep the night before since she simply cannot relax herself after her home invasion. Erika shares that she has a lot of sadness still, but her new antidepressants have really helped her situation. She admits that she is really “mean” and borderline bullyish, which is a term, according to Erika, that she wears like a badge of honor.

We learn that Sutton was so bored during quarantine that she decided she would take the bar, to which Erika explains Tom used to GRADE the bar. Imagine?! Erika even offers to help Sutton study since she knows “the tricks.” I’ll bet she does… Rinna is trying to be open about her grief, and she shares that she feels her mother around her always, to which the women toast.

Post breakfast, Rinna, Crystal, and Erika decide to get some surf lessons, which is just a segment of secondhand embarrassment, although watching Erika wipe out was quite humorous. After a bit, the ladies call it a day, and in the words of Rinna, “I don’t wanna break my neck. I’ve got lipstick to sell.”

In the meantime, Kyle, Sutton, Garcelle, and Dorit decide to go shopping… but in Mexico, the store also has a bar. Incredible. And naturally, Sutton picks out the most expensive thing in the store. It doesn’t take long for the conversation to turn toward the night before when Sutton and Crystal were at odds with each other.

Sutton explains that she is at “zero ground” with Crystal. Translation: They are at the beginning of their friendship again. But, of course, that isn’t gonna fly with Erika. Over at the beach, Erika reminds Crystal that Sutton called her a liar, and Erika hypes her up by saying that she needs to open her mouth so that others don’t fill in the story for her.  Erika makes it clear that Crystal is going to be run over if she doesn’t say something to Sutton. “You can’t let someone tell you you’re a liar and take it on the chin.”

Seems like Kyle and Erika are on the same stir-sh*t-up page. Kyle wonders if Sutton is afraid of Crystal, but Sutton denies any fear. Garcelle tells Sutton she was powerful when she called Crystal out for her repeated behavior with other friend groups. Evidently, Crystal caused problems within another group of friends, and it is mind-blowing that Crystal admitted to a falling out with 14 of her friends! I mean, who has that many friends to begin with?! What is interesting is that it is unclear what Crystal could be gaining from throwing Sutton under the bus. The women muse it’s because she wants to be liked by all the women and come out on top.

Seeing Erika hanging on Crystal is ridiculous. Crystal sees it as Erika protecting her, but the reality is Erika just wants to stir the pot. Let’s be real: to Erika, Crystal is simply a game piece to go after Sutton. Erika is using Crystal to air her grievances and personal issues with Sutton.

Later in the evening, Rinna explains that so far, this trip has been a nice distraction from her recent loss. Kyle interrupts the glamming in Erika’s room with a FaceTime call, and Rinna and Erika let Kyle know that Crystal cried the entire time after surfing (thanks to Erika… cool). Kyle appears shocked to hear about Crystal’s tearful afternoon.

Side note: It is rather humorous watching the juxtaposition of Erika and Diana with their glam teams vs. Kyle ironing her mint jumpsuit herself.

At dinner, Rinna brings up Diana’s book, Room 23 — mainly because she posed in it and because she knows deep down the topic of the “sex-positive, woman-positive book” will make Diana squirm. Diana clearly does not want to talk about the book and laughs off the producers questioning her about the sex trafficking rumors. There’s definitely more to THAT story…

Before the food comes out, a group comes over to the women to cleanse the energy, but Rinna is doubtful that this is gonna fix this crew. Kyle gets right into it and wants to know what the ladies did after surfing… even though she totally knows Crystal cried like a baby in “Momma Erika’s” arms. Erika lets everyone know that they talked to Crystal about being called a liar, and Sutton can tell right away that this is not going to be a fun dinner for her.

Erika demands to know who this “group of friends” is that Sutton mentioned about Crystal the night before, and to that, Sutton talks about reputation. Crystal reminds Sutton that she “heard this” about her and that she doesn’t “know this.” Sutton throws the other ladies under the bus and lets Crystal know that everyone at the table heard the news about her broken friendships.

Evidently, Erika is Crystal’s voicebox this evening. It is very clear that Erika just does not like Sutton… this seems a little bit forced. Garcelle reminds Crystal to speak up for herself, and that when she stays quiet, it feels like everyone is ganging up on her. Sutton is tired of Crystal attacking her character, but she apologizes for talking about the rumors she brought up the night before. However, Sutton will not take back the fact that Crystal comes at her repeatedly, and she needs her “to stop that.” Erika inserts herself in the mix, and even Garcelle is annoyed by Erika’s antics.

Sutton essentially begs Crystal to apologize: “You need to say it out loud so everyone can hear, you’re not going to do that to me again.” Sutton claims to really like Crystal, but Diana believes that Sutton is contradicting herself again. The night before, Sutton told Crystal she hates her, and then she likes her. Sutton tries to tell Diana she is a good person and repeats it angrily… and it’s rather laughable and ironic since Sutton’s voice rises, and she starts pointing her fingers in Diana’s face all while trying to claim she is a good person.

Sutton excuses herself to go to the bathroom, and Kyle goes with her to support her keep the cameras rolling. Sutton yells that she wants a break, and Kyle tries to tell Sutton it’s not even that big of a deal. Interesting that Kyle, the biggest drama queen, is saying that. In the meantime, Diana, full of hormones, becomes emotional, and she falls apart at that moment. Erika reminds Diana that she did nothing wrong, and she thanks God for Garcelle: “Everybody’s just way too much.” Sutton returns to the table, and Erika gleefully lets Sutton know that Diana started crying because of her.

When Diana and Crystal head to the bathroom with Dorit to freshen up, Kyle takes the opportunity to say, “She has to understand that Crystal put herself in that position.” Kyle and Garcelle believe that Crystal keeps pulling the victim card, and she clearly doesn’t feel comfortable in the group/ is screaming for attention. It IS strange that 14 friends dropped Crystal, which might give credibility to the rumor they have heard. Nevertheless, Sutton is willing to start over and build a friendship with Crystal. And let’s be honest, after losing 14 friends, Crystal could use a couple of new ones.