Find Out Which 90 Day Fiancé Couples Got Married! 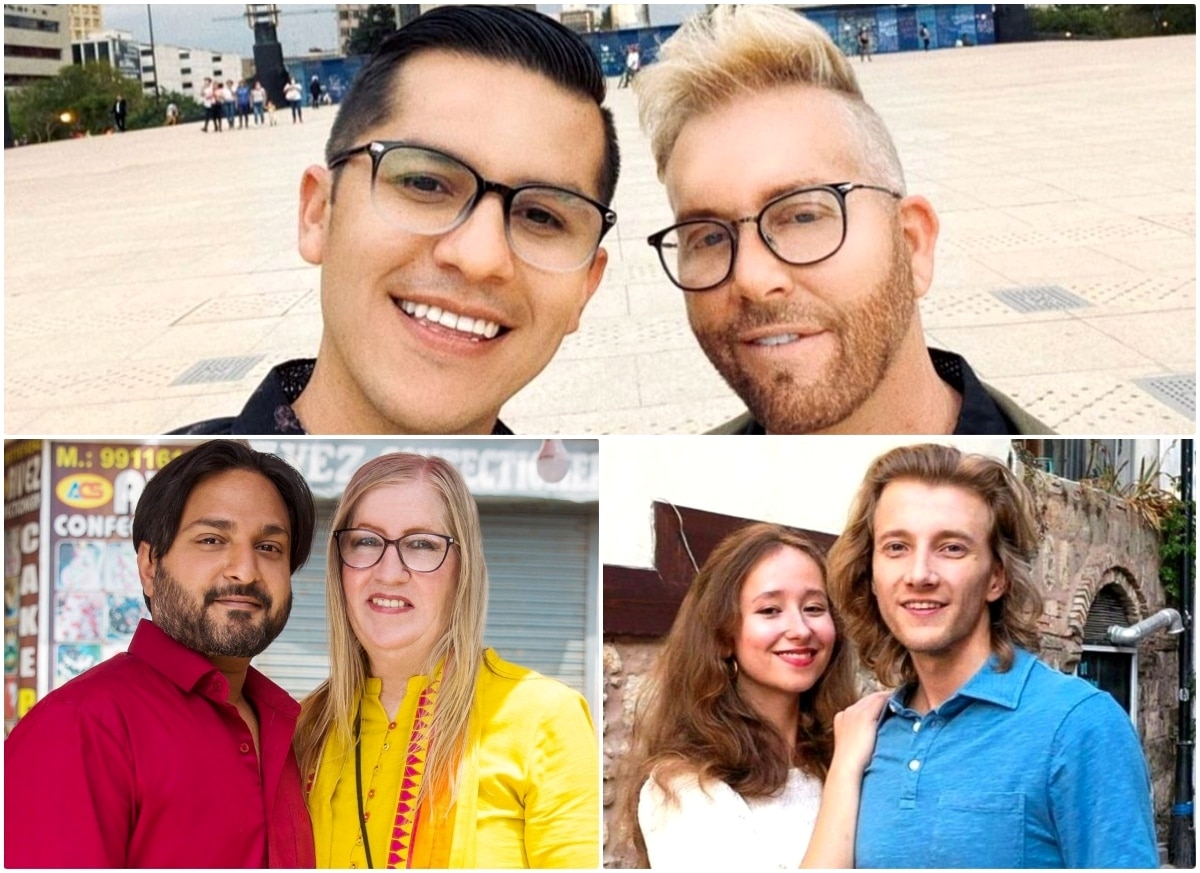 It’s the holiday season, love and joy are in the air, and apparently, for the 90-Day Fiance: The Other Way couples, so are wedding bells!

Three couples are tying the knot in an unprecedented event with a fourth couple’s wedding plans in full swing.

Steven Johnson and Alina Bio finally got their dream wedding day in Turkey. Kenny Niedermeier and Armando Rubio said “I do” in Mexico and even Jenny Slatten and reluctant Sumit Singh finally took their final steps towards their dream Indian wedding.

In the last episode of 90 Day Fiance: The Other Way we saw Steven and Alina finally making their way to the alter as they gathered all their paperwork and headed to get the approval for their wedding and marriage license.

While it was the moment they had been waiting for, it came almost too soon as they booked their wedding date appointment for that Wednesday, two short days away.

Alina hired a last-minute wedding planner who came with her to pick out her unique wedding dress. Now, in an exclusive sneak peek, which can be viewed here, we get to see Alina’s dress in action as she and Steven finally tie the knot.

The sneak peek reveals that while Alina’s friends and family couldn’t make the wedding, Steven made sure she was not alone by collecting her favorite local cats and bringing them to the ceremony. While it may seem like an odd gesture, for this quirky couple, it makes complete sense.

With the pandemic, Alina could not come to America to be with Steven, and he, in turn, could not come to Russia to be with Alina before they were married, so the two met up in Turkey, where the borders were open. But the couple didn’t know anyone in Turkey, so while they were there, they befriended the local street cats and felt as though they were part of the couple’s family. So Steven making sure the whole crew could make it to the wedding, fur family included, is really a touching gesture.

The two had initially agreed to stay in Turkey for as long as their visas allowed, which was only a few weeks, then get married and return to Russia. At least, that was the plan.

The two hit some major obstacles as Steven admitted some slip-ups in both his commitment to the Mormon religion and to Alina, as he revealed he had in fact slept with other women, even after he and Alina had met and started talking. There is still some debate as to whether the two are currently still together, but at least for the moment, the wedding looks like it went off without a hitch.

While the two hit some road bumps along the way, they do seem happy at least for the moment, and from the previews, it looks like their wedding was everything the couple(and we) had hoped for.

Kenny and Armando Tie the Knot

90 Day Fiance: The Other Way’s Kenny and Armando finally tie the knot, surrounded by friends and family in Mexico. The couple had to jump through more than a few hoops to get to this day, and from the pictures, it looks like they are not wasting a minute of their celebration.

In exclusive pictures, TLC provides a sneak peek of Kenny and Armando’s big day, and from the photos, it looks just as extravagant and fun-filled as we hoped it would be. 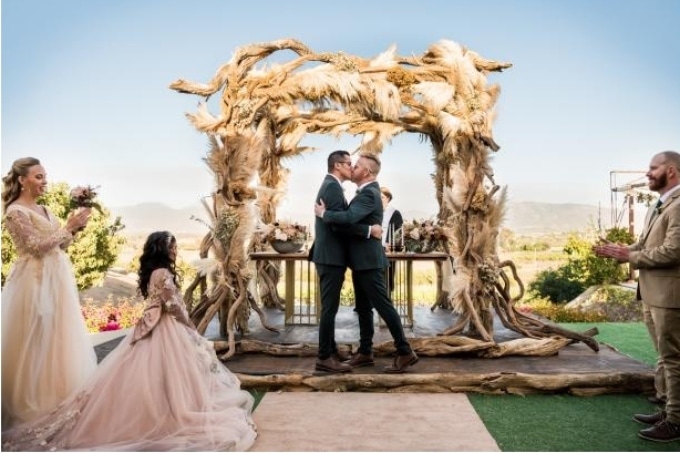 Kenny and Armando started off with more than a few bumps in the road. Due to the pandemic, Kenny had to leave his home and entire family behind in Florida to move to Mexico to be with Armando and his young daughter, Hannah, who were not able to come to the U.S. at that time. It was a big blow for Kenny who was very close to his four adult children and his young grandson, Cooper.

But the two overcame that struggle just in time to take on the Mexican government over the right to marry in the country. After initially getting the runaround, finally, the two were able to be approved for their marriage license and could finally set a date and finalize their dream wedding.

But once that hurdle was overcome then the couple had to worry about Armando’s conservative family who was a little shocked by his decision to marry a man, after previously being married to a woman and having his daughter Hannah. There was some debate as to whether Armando’s father would actually attend the wedding, but finally, he agreed to come, much to Armando’s relief.

Phew. No wonder these two are so happy on their big day, they have a lot to celebrate! 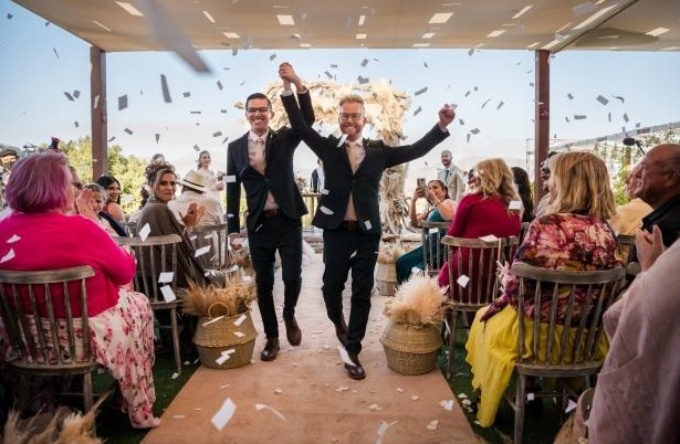 But despite all the hurdles, these two have always been rock solid and seem to still be doing just fine, if not better than that, and we couldn’t be happier for them!

90 Day Fiance: The Other Way’s Jenny Slatten and Sumit Singh are finally getting married! We know, we know, you’ve heard this before. But this time, it looks like it’s finally true!

Three years and countless obstacles later, these two long-distance lovebirds are finally in the same place, at the same time, the stars have aligned, and the in-laws have stepped aside. And these two are tying the knot!

In an exclusive sneak peek from TLC that can be viewed here we see that Jenny and Sumit’s marriage process has officially begun.

The last we had checked in, things were looking pretty rough for Jenny and Sumit as the most recent episode revealed, that Sumit had gone behind Jenny’s back, to stop their marriage process.

After finally getting the astrologer’s ok, and Sumit’s parent’s grudging acceptance of their relationship, it seemed all the obstacles between Jenny and Sumit’s marriage were finally out of the way. The couple headed to the lawyer’s office, filled out all the paperwork, and got their marriage process started. But in a tense moment, Sumit revealed to Jenny that he had called the lawyer and asked him to hold the filing later that evening.

Jenny was understandably upset, and it looked like it might really be the end for these long-time 90 Day Fiance: The Other Way’ers. But just when it seemed all hope was lost, we got this sneak peek of the two meeting with the lawyer as he clicked “submit” on their paperwork. The next scene featured Sumit and Jenny both giggling and glowing with excitement. Sumit admitted he felt really good and that he had been worried for nothing.

The closing scene features Jenny at a traditional Indian celebration, which she previously would never have been invited to, could that mean the two have already tied the knot? All signs point to the couple still being together and still going strong so we are thinking that is definitely a strong possibility! 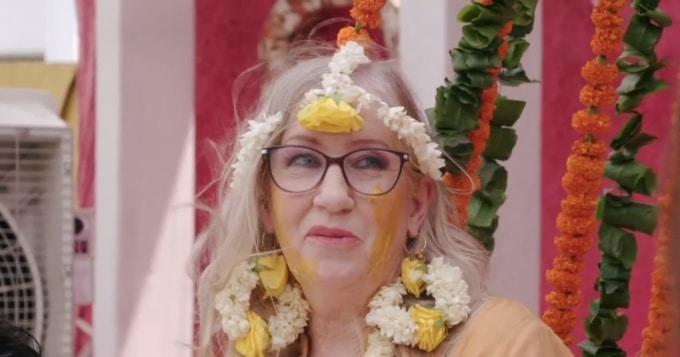 With so much love in the 90 Day Fiance: The Other Way we can’t help but catch the vibes. We can’t wait to see the full-length feature of all the couples wedding days and happily ever after’s.