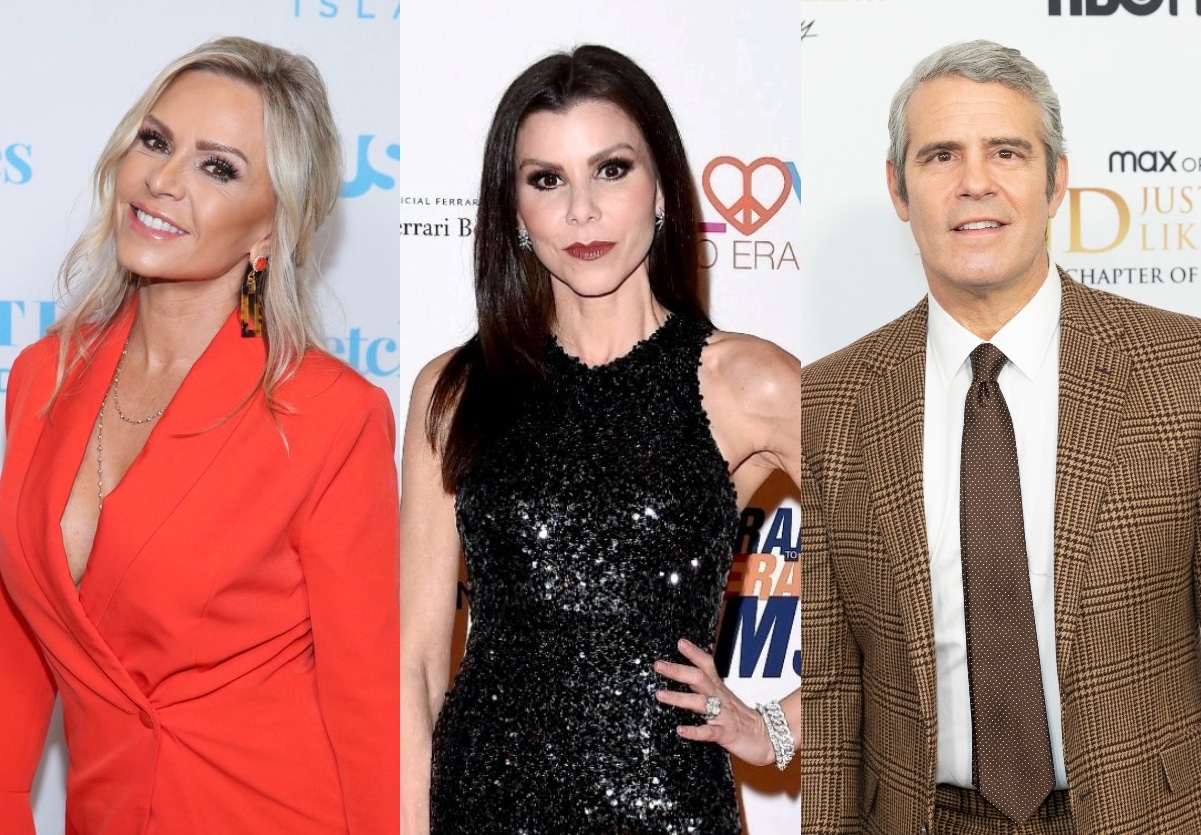 Tamra Judge believes Heather Dubrow is behind recent comments made by Andy Cohen in regard to her potential future on The Real Housewives of Orange County.

After the Watch What Happens Live host appeared on Jeff Lewis‘ radio show earlier this month, saying he doesn’t see how Tamra could return to the show while hosting “a whole podcast about the behind-the-scenes of the Housewives,” signaling to her and Teddi Mellencamp‘s Two T’s in a Pod, Tamra spoke out on the same show, noting that Andy’s statements came from a thought Heather originally shared on her own podcast.

After Andy admitted that he hasn’t actually listened to her and Teddi’s podcast, Tamra told him, “You can’t just read headlines and expect to believe that,” and she explained that he’s listening to “secondhand” information.

When Jeff asked Tamra if she believed that information was coming from Heather, she confirmed, “Mm-hm,” and she suggested Heather doesn’t want her to come back to RHOC.

“It’s very confusing to me and also kinda heartbreaking, because I always rallied for Heather to come back after she left,” Tamra admitted. “I asked Andy. I would talk about it in press… And then when she got [back] on the show, people would say, ‘What do you think about Tamra coming back to the show?’ She goes, ‘She had a good run.’ And I thought, ‘Oh, ouch.’”

After learning Heather wasn’t supportive of her potential return and was instead promoting that of Alexis Bellino, Tamra reached out to Heather.

“She did a podcast saying the same thing that Andy said. The original thought came from her. I said, ‘I don’t understand why you’re doing this,’” Tamra recalled. “And she’s like, ‘Oh, no no. It was my co-host on the show.’ He was bringing up this and that and saying that I was a blogger and that I have no space on the show, which, I’m not a blogger. I have a podcast just like [Heather] and even in her bio on her podcast, it says, ‘Recapping Housewives,’ so why is that any different than what I do?”

According to Tamra, Heather’s co-host was “trashing” her, suggesting all she does is “sit around and watch Housewives shows.” She also noted how Heather did no such thing after leaving the cast.

Tamra then noted that she had been accused on Heather’s podcast of “exposing” the RHOC reunion after Teddi shared a behind-the-scenes picture and watermarked it with a Two T’s in a Pod logo.

“I didn’t have anything to do with it and I felt like crap afterwards and it caused a big sh-tstorm and I’m like, ‘F-ck, Teddi, you should’nt have done that.’ So she used that as, ‘Oh, Tamra’s a blogger. She’s doing behind-the-scenes,’” Tamra explained. “And she texted me, ‘Why would you post that?’ at 12:30 in the morning and I’m like, I didn’t even respond to her. I’m like, ‘I don’t have to answer to you and I’m not going to answer to you.’”

Also on Jeff’s show, Tamra shaded RHOC season 16 for being too focused on Heather.

“They promoted every business she has. She was the first on to walk in and out every single door. It was Heather Dubrow’s world,” she noted.